The Veteran Foundation is a private initiative aimed at supporting Danish veterans and their relatives, who were deployed to war and to disaster areas on behalf of Denmark. These include employees and former employees of the Armed Forces, the Danish Emergency Management Agency, the Police, ministries, boards and similar organizations.

One of the Veteran Foundation's activities consists of concerts under the name ENGAGE. In the long run, the idea is that there will be nationwide concerts that will be run like a professional business, trying to involve as many veterans as possible. Everyone is welcome to the concerts where veterans can get a ticket for free, and veterans and non-veterans can meet under a casual and friendly setting.

The Veteran Foundation is working to become a strong private organization that can work professionally to improve the conditions for Danish veterans and act as a supplement to the efforts made by the country.

Jeppe Michael Jensen is the founder and initiator of the project. Jeppe was born in 1972 and is a veteran from the Balkans. He was wounded in an attack on his 1993 convoy to Bosnia Herzegovina, which killed several of his colleagues. Since then, Jeppe has had a civilian career as a lawyer, entrepreneur, and director. Among other things, he established the Billetlugen A/S company 13 years ago. 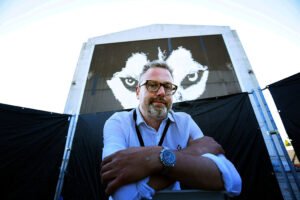 In addition to Jeppe, a number of people from the Armed Forces, the media and cultural world are involved in the advisory board.

Carsten Lassen: The Specialists, CEO. Previous director of the Copenhagen Jazz Festival and the venue Jazzhouse

Christian Herskind: Brigadier General (R), Deputy Chairman of the Soldaterlegatet and of Mars and Mercury, and Lawyer

Jette Albinus: Brigadier General and Chief of Staff of the Home Guard Command

Kristian Riis: Director of Volcano ApS, musician in the band Nephew, and involved in a number of festivals at home and abroad as a board member and advisor

Magnus Reetofte: Head of Communications at the Royal Theater, Former CEO of the VEGA venue

Martin Bøge Mikkelsen: Chairman of the Board and member of the Interforce, the Capital Region

Susanne Lund: Colonel and Head of Communications and Spokesperson for the Defence Command Denmark

Tobias Kippenberger: Director of Tikkio Denmark, solo musician, musician in the band The Floor Is Made Of Lava, former financial advisor in the music industry

Tue Hækkerup: Formerly a member of the Citizens' Representation in the Copenhagen Municipality, former Head of Department PH Metropol, and Captain